In the post-match conference from last night, a defensive Wenger blamed a lack of quality in the team’s “defensive concentration”.

It really is the major reason for conceding three against an Olympiakos team seeing only 30% possession. We did too little with what we had – 18 shots to their 9, 9 on target to their 4. 8 corners to their 4 – but it was errors that cost us.

Olympiakos’ first came from a corner. As it’s taken, Pardo is free on the edge of the box. It’s a fairly standard position to be in, but apparently not worthy of picking him up. As the ball swings to the edge of the area, Mesut Özil sort of follows and then gives up on the ball. He doesn’t even appear to look at Pardo, or attempt to engage any player the ball might be going to.

Pardo makes a fairly clean effort which shouldn’t really trouble Ospina, but it deflects off a hapless Ox and finds the net. Oxlade-Chamberlain either realises too late the ball is coming his way, or fails to properly attempt a block of his own.

Either way it’s a poor set of circumstances to concede from. Really poor.

By this point we’d had two good chances. Theo found himself in the box, but failed to adjust his body (use his left-foot) and generate power to get a clean shot away. Chamberlain too found himself in the area and could have made it 1-0, but under pressure put wide from a position to the right of the goal.

The response from Theo was heartening, if a tad fortunate, and we deserved to be on level terms.

Olympiakos’ second can be blamed on Ospina, but it’s a clear misjudgement of the kind that can happen (see Ronaldinho against Seaman, WC 2002). Ospina’s strength is in staying on the line, using his reflexes and his reading of an attack as it unfolds. He doesn’t tend to come and dominate the box in a set-piece situation, and here we see why.

In this incident he moves early, the power and height on the corner suggesting it’s a deep, high-hanging ball which he can get up and claim. There’s wicked curl though, and he’s caught out. He jumps back to try and salvage the situation and fails.

We can’t be entirely sure the ball crossed the line, because for some reason there’s no goal-line technology in the UCL. Still, he was punished. Cech may not have made the error, may not have shown this lack of “defensive concentration”, but it’s a moot point if Cech had a slight issue preventing him starting.

Ospina’s played well for us generally, kept a good deal of clean sheets last season, and has incredible reflexes and great on-the-line shot stopping. But yes, it’s clear where he needs to improve.

We equalise again through Sanchez. It’s interesting to note a couple of things here.

Not only is Sanchez apparently back on form, and that’s his second header in as many games, he nearly scores another later. Also the cross for this goal is from Walcott. Theo’s taken up a position just inside the right edge of the 18 yard box, in an area of the pitch more akin to a winger feeding a natural centre forward.

Alexis confidently heads home and it leaves me wondering if, even though Walcott is progressing “game by game”, the better option up top (when without Giroud) is actually Alexis Sanchez – especially against teams sitting back.

Sanchez possesses a clear poaching ability Walcott has yet to muster, and has superior feet and body adjustment in tight spaces.

He also makes up for a lack of size in playing with his back to goal through intelligent movement. His shots closer to goal appear instinctive too…but more on that another time.

Defensive indiscipline again. As we chase to take the lead, de Freita Couto Júnior beats both Ramsey and Bellerin far too easily. At this point Finnbogason is being marked by Gabriel, but as the ball is cut back past Cazorla (somewhere in no-man’s-land) and in-field to Fortounis, Gabriel leaves Finnbogason to charge Fortounis.

The shot is blocked by Mertesacker, but as it comes out to Cambiasso, Ramsey, Cazorla, Mertesacker Gabriel and Gibbs ALL run out towards him. This leaves Pardo and Finnbogason both unmarked on the right in space.

Gibbs tries to adjust his feet and make Cambiasso take the shot, but as Cambiasso chips the ball over his head Gibbs is forced to turn and chase Pardo, while Finnbogason goes square six yards form goal and behind the Arsenal line.

Pardo finds Finnbogason, who taps the ball past Ospina. Mertesacker gets back but does nothing of note to try and stop the shot other than being right next to Finnbogason.

It’s terrible, and fitting perhaps that such a lack of defensive concentration should result in the winning goal. Olympiakos didn’t deserve the win based on the Arsenal dominance borne out by the stats. But then, we most certainly didn’t deserve it based on the above defensive frailties. Olympiakos for their part were stoic at the back…although we certainly had enough quality to beat them if only we didn’t self-sabotage.

A lack of leadership is one of the louder criticisms being levelled at the squad today. The charge being that strong characters of the likes of Vieira haven’t been seen for some time. Falmini may have offered that had he been on the pitch, but it’s a point worth pondering.

Still, we can’t magic such characters into the squad, and against United on Sunday we’ll likely need it. So here’s at least hoping our quality going forward is matched by a more stable defensive display. 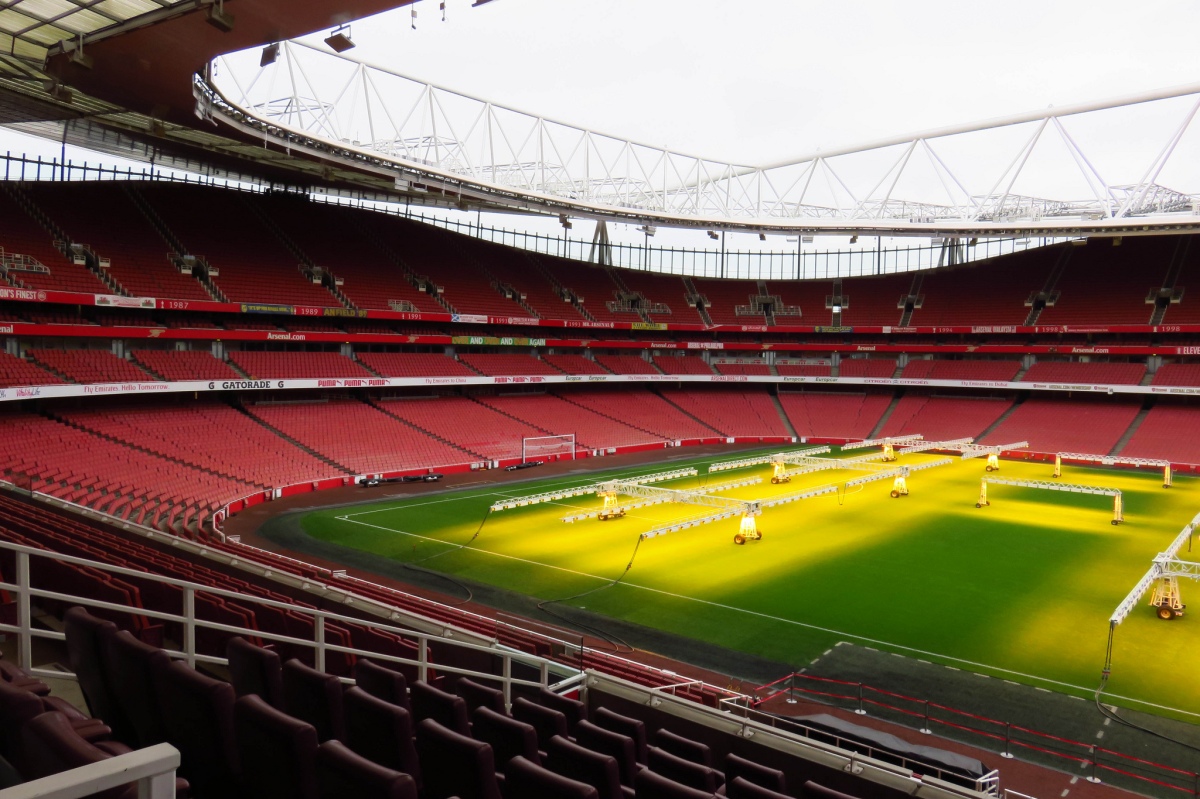 A 5-2 win and we couldn’t have asked for much more. Saturday’s victory over unbeaten Leicester saw the wish list perfectly met: three points, a Giroud goal, a rampant Alexis, tamed tempers and a solid balance.

A game of counter attacks was won out by a team displaying superb technical ability (and fitness) and it’s easy to see what the boss meant post-game when he said “we’re coming back our best”.

Conceding two goals clearly isn’t ideal. Yet, without being too school-of-Keegan, if you’re going to score five then the two isn’t usually problematic. We know defensive consistency is something Wenger will be just as keen to work towards as attacking prowess, and clean sheets do breed defensive defiance.

Anyway, more thoughts on various things to come before the weekend, but immediately we’ve tonight to think about.

A home-tie against Olympiakos seems a good way to get back on track in Europe. It really should take some kind of disaster to be as poor as we were in Zagreb – and by know means do I want that. Seemingly even Munich’s Philipp Lahm (according to the Express) found our opening result shocking:

The defeat of Arsenal in Zagreb really surprised me. At first I thought it was a mistake.

Unfortunately not, and it means another must win game against another ‘unbeaten’ team. Olympiakos sit top of the Greek Super League with five wins from five, although the 3-0 UCL Matchday 1 loss to Bayern may sow some doubt in Greek minds. Bayern held 71% possession and had 22 shots at goal, so if we ramp up the pressure we might start to see some similar cracks.

We’ll need to capitalise on those, but just how we’re going to break through the Erythrolefkoi could be telling for the remainder of the season. In the Champions League most teams arrive to play. Undoubtedly Olympiakos will be looking for defensive discipline, and that could make at least Walcott’s night a little tricky.

Against Leicester, Theo found runs in behind a rather high line, making runs off the shoulder; a situation the Foxes seemed happy to accept until we showed second-half dominance. Okazaki came off for King to bolster Leicester’s midfield, and their defence dropped deeper to nullify Walcott’s pace. Giroud still offers a better outlet up top against a sat back four – and was duly sent on at the weekend – but with Frenchman is of course suspended tonight.

Walcott will start then, but his pace may have to be attuned to short sharp bursts of a few yards to gain maximise space away from defenders, with either single touches to set or immediate shots. It’s something the best strikers can call on, and if he wants to develop fully in the role he’ll need nights like tonight to hone his skills.

A lack of striking options means the obvious replacement for Walcott if needed is Sanchez. Few will have issue with that after he lit up the King Power, and needless to say the goalscoring burden isn’t Walcott’s or Sanchez’ alone. An dangerous front four seems much more likely this time out. Özil and Ramsey would love to find the net, and with the Ox still waiting to find true form off the bench, there’s plenty to be hopeful about.

In other areas the whispers are that Ospina will start. Arseblog ponders a Cech injury but, while that could be the case, I wouldn’t be surprised if the competition between the Czech and Columbian is a little bit closer than many consider. Gabriel is available, but the only other obvious change to Saturday’s strarting XI can come in midfield. With Arteta and Flamini out, the Coquelin and Cazorla core seems certain.

Our central midfield options have been analysed to the Nth degree, but Cazorla especially benefits from Coquelin alongside him. Coquelin provides more athletic, lateral defensive cover than Flamini and Arteta, and allows the Spaniard greater vertical movement to drive our play up the pitch and away from the defensive third. This was epitomised by the 2-0 against Manchester City in January. Cazorla was the stand-out player, but Coquelin wasn’t far behind.

Focus again then will be heightened as to how we manage our own game, as well as that of our opposition. Honestly I think we can allow ourselves some confidence, just as long as the team has shaken off those zagreb zeds.